Like some horrible broken record the response in the United States after a mass shooting follows a typical pattern: thought and prayers are offered by all, we are told to not politicize the tragedy by bringing up the topic of gun control, deflections away from gun control ensue (focus on mental health, gun control wouldn’t have stopped shooting x, we need more guns, not less, etc. etc.), the political leadership does nothing and then the country moves on . . .until it happens again and the cycle repeats.  There are many reasons for why our political leadership does noting but I think it comes down to a fundamental point about collective action – a discipline and organized minority will always be a disorganized majority, or “the few defeat the many“.  Mancur Olson, in studying the provision of public goods, noted that concentrated minority interests tend to be overrepresented than larger, diffused, majority interests.  This is because larger groups are more susceptible to free riding and their organizational costs are much higher.  In the U.S. many gun control measures have majority support.  According to a recent Pew Research Center Survey – Americas Complex Relationship With Guns 2017, a slight majority think, generally, gun laws should be stricter.

And there is large majority support for many gun control laws such as banning sales to the mentally ill and people on no-fly lists, etc. 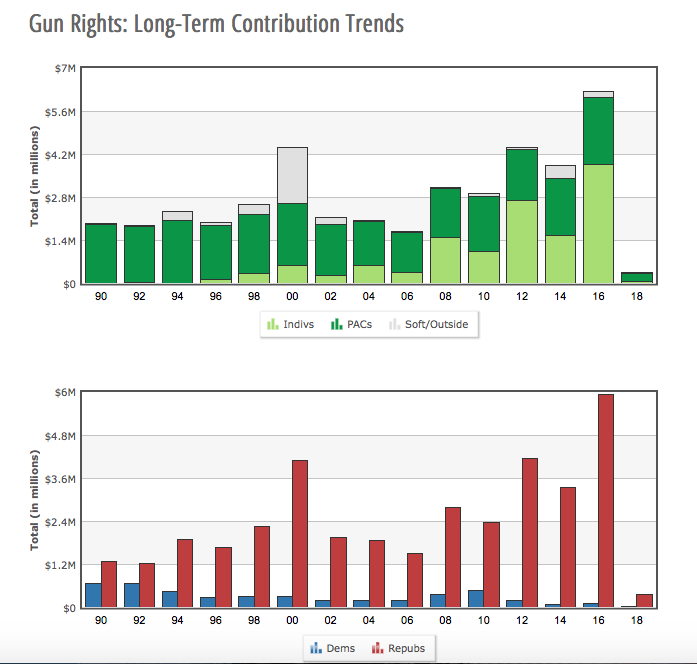 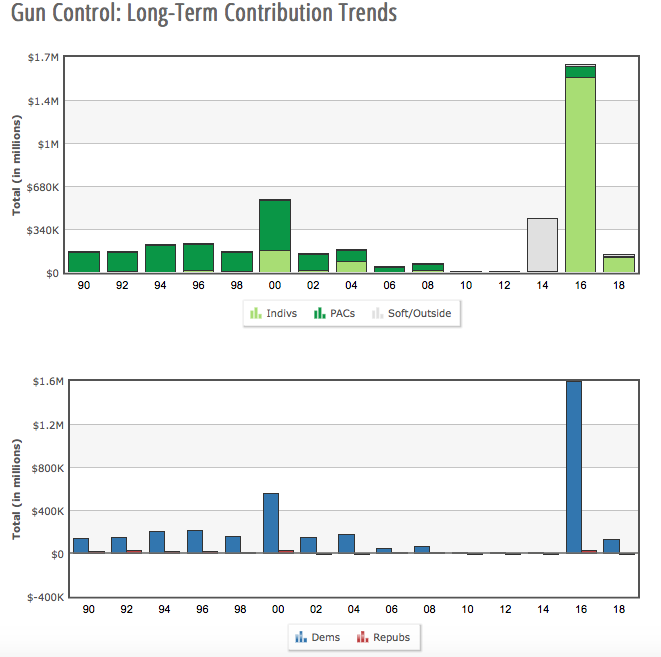 The gun rights side drastically outspends the gun control side in campaign contributions.  The same disparity is seen in their lobbying efforts as well: 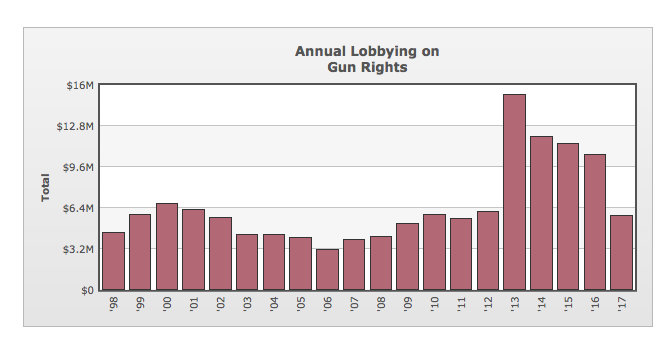 The gun rights side is better organized but its also more disciplined.  What is meant by disciplined is that they care more about, and act on, their anti-gun control positions more than the pro gun control side which is more susceptible to free riding.  In other words, there is an intensity gap between the gun rights side and the gun control side and that intensity magnifies the strength of the gun rights groups despite their minority position.  An example of the intensity gap can be seen in the following survey questions asked by the Pew Research after the Sandy Hook massacre in 2012.

The questions asks respondents if they supported a recently defeated Senate bill expanding background checks.  Large majorities supported the bill but of course it failed.    Partially its because, as the charts above show, the anti-gun control side is more organized in its campaign and lobbying activities, but its also because of the intensity of those on the gun rights side.  Notice the gap between the two sides in response to the following questions from the same survey: 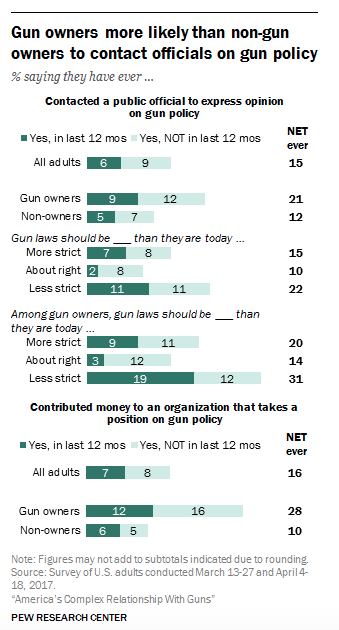 Gun owners were more likely to contact a public official about gun policy than non-gun owners (21% to 12%), and were also more likely to contribute money to an organization that takes a position on gun policy (28% to 10%).  The anti gun control position is the minority position in American politics but since it is better organized and more disciplined it is able to see its preferences reflected in policy.  For meaningful gun control policies to be enacted the diffused majority needs to be organized and close the intensity gap with the gun rights side.  There are some signs this may be happening, however, as the Center for Responsive Politics notes that Michael Bloomberg’s Independence USA super PAC spent $5.6 million in outside spending during the last election and

“The money went to support federal candidates who were in favor of gun control and attack one who wasn’t; the group had 100 percent success rate.”

One thought on “Why There Hasn’t Been Meaningful Gun Control Yet.”