In my previous post I highlighted the different rates at which the 50 U.S. states (and Washington D.C.) resettle refugees.  On a per capita basis, North Dakota on average resettles more refugees than other states.  The next question to ask then is why?  Why does North Dakota resettle more refugees than others?  The resettlement process is coordinated through the federal government (specifically the State Department’s office of Bureau of Population, Refugees, and Migration) which works with nine volunteer organizations (known as VOLAGS) to help resettle refugees in the U.S.  The Office of Refugee Resettlement (situated in the department of Health and Human Services) provides more long term support for refugees in coordination with state governments and/or voluntary organizations.

Although the Federal government makes the determination of who gets resettled in the U.S. as a refugee the decision on where and how they get resettled is mostly determined by the VOLAGS.  The nine VOLAGS are: Church World Service, Ethiopian Community Development Council (ECDC), Episcopal Migration Ministries, Hebrew Immigrant Aid Society, International Rescue Committee, US Committee for Refugees and Immigrants, Lutheran Immigration and Refugee Services, United States Conference of Catholic Bishops, and the World Relief Corporation.  The VOLAGS work with local organizations to determine where specifically refugees will be resettled.  Most of the local organizations they work with are religious based including churches, temples, mosques, and that isn’t just for the faith-based VOLAGS but the secular ones as well.  These local religious organizations provide the people power that make the resettlement process happen.

Good thing about the Association of Religion Data Archives however is that it contains information on the number of specific religious congregations in each state.  Two of the biggest VOLAGS are the United States Conference of Catholic Bishops and the Lutheran Immigration and Refugee Services organization.  Both of these organizations rely on and mobilize local churches to help with the resettlement process.  When one looks at the number of Catholic Churches per capita in each state a stronger correlation emerges. 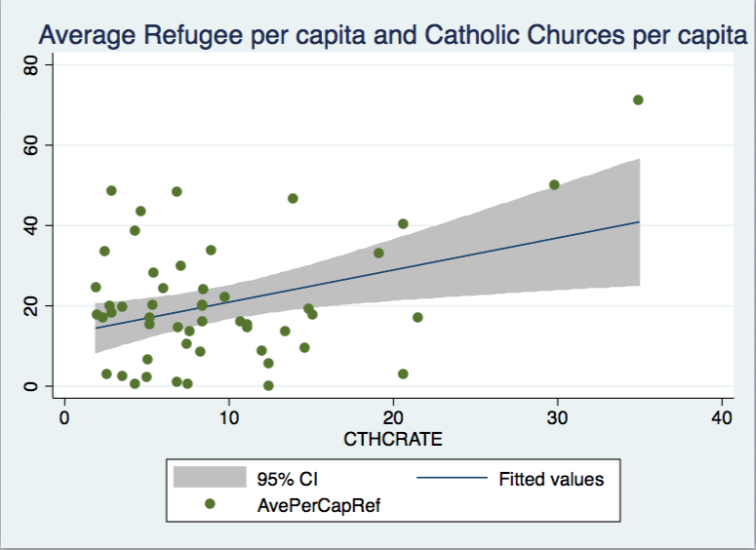 This data is noisy and there is not a lot of variation because there are not a lot of Lutheran Churches outside of a couple states.  North Dakota is one of those states however and the presence of those churches together with the Catholic churches give a good explanation as to why North Dakota resettles more refugees per capita than any other state.